News and Updates from the World of Australian and Canadian Immigration
January 11, 2017:
​Canada #ExpressEntry update:
January 11, 2017 saw a record number of 3,334 invitations being extended by Immigration, Refugees and Citizenship, Canada (#IRCC) for their Express Entry program. The lowest cut off score on the Comprehensive Ranking System (#CRS) this time around being 459.
All those invited have 90 days from the the date of invitation to make a valid visa application.

On 14 December 2015, new criminal and civil penalties and visa cancellation provisions were introduced by the Department of Immigration and Border Protection, as part of a 'paying for visa sponsorship' framework that allows for sanctions to be imposed on a person who asks for, receives, offers or provides a benefit in return for visa sponsorship or employment (that requires visa sponsorship). For the full text click here.


The seventeenth draw of Express Entry took place on the 18th of September 2015. It saw 1545 candidates getting an invitation to apply. This was a new record as CIC has issued to invitation to candidates with CRS scores as low as 450.

Skilled Occupation List (SOL) - The SOL is relevant for applicants for:

Consolidated Sponsored Occupation List (CSOL) - The CSOL is relevant for applicants for:

The following changes will apply to applications made for the above visas on or after 1 July 2014.

Changes to occupation titles - The following titles will be changed: 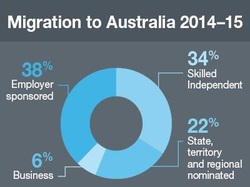 Migration builds Australia’s economy and supports the labour market. 128,550 places have been allocated for skilled migration in 2014–15 in the following categories.
09.05.2014:

From 1 July 2015, the Department of Immigration and Border Protection and the Australian Customs and Border Protection Service will be consolidated into a single department. These changes do not have any immediate effect on visa or citizenship applications or processes—your existing application or any new application will continue to be processed in accordance with the service standards available on our website. For updates see:www.immi.gov.au/About/Pages/australian-border-force.aspx

In 2012–13, the five major source countries for points-tested skilled migration were India, the People's Republic of China, the United Kingdom, Sri Lanka and Malaysia.


Did you know the student visa changes announced on 29 October 2013 will benefit overseas students and international education providers? This package of measures will simplify student visas through:
These changes will make Australia’s education system even more attractive.

Simplifying the AL framework will benefit students from countries such as China and India and will assist vocational education and training students.

Assessment levels will reduce from five levels to three, while financial evidence for AL3 students will reduce from 18 to 12 months—provided funds are from a close relative of the student visa applicant. Both these changes are subject to the legislative change process, so they are proposed changes until formally recognised in legislation from March 2014. If the proposed changes do go through the legislative process as intended, students from many countries will be able to apply for a student visa with up to A$40 000 less in the bank.

Following the swearing-in of the new ministry led by Prime Minister Tony Abbott on September 18, there have been machinery of government changes that affect the department and the immigration portfolio.

Transition to the new arrangements is under-way and may take some months to come into effect.

The department will also contribute to Operation Sovereign Borders and the joint agency task force that has been established to combat people smuggling and protect Australia's borders.

The department will continue to contribute to Australia through the management of its migration, humanitarian and citizenship policy and programmes.